On Sunday, April 26, 2009, I attended the Hongwanji Mission School 60th Birthday Celebration from 3:00 P.M. until about 5:45 P.M.  They had student performances from preschool to grade 8.  They performed songs, drama, taiko, and band music.

My cousin Sereny Suzuki’s son Ryder Suzuki performed with preschool students a Japanese song “Don Na Iro Ga Suki”.  Her husband Beau and daughter Chloe was also there.  I saw a number a familiar faces and friends I haven’t seen in awhile at the event.

At the peace pole ceremony and tree dedication, Sen. Suzanne Chun Oakland, Rep. Corinne Ching and I presented Senate and House certificates  respectively.  We said a few words each.  I mentioned how the Hongwanji Mission School, in addition to teaching educational tools such as math, English, and science, it teaches compassion and peace, which is very, very important for the kids.  It was at peace pole ceremony, I waved to my little second cousin Chloe and I saw my cousin Sereny.

We ate Hawaiian food and enjoyed ourselves.  It was a very good event. Tanoshikata.

Written Remarks into the House Journal

I rise in support of Senate Bill 764, Senate Draft 2, House Draft 2, Relating to Real Property.  Small businesses and farms are an essential element in strengthening and diversifying Hawaii’s economy and creating jobs for our people and despite their contribution to Hawaii’s economy, small businesses and farms are at a disadvantage in terms of land ownership.  The commercial, industrial, and farm properties that exist within the state’s districts are primarily owned by a few landowners.  These landowners control large tracts of land and retain their ownership by means of leases to small businesses and farms, which in turn supply services and products for our community.

The purpose of the first part of this bill is to stabilize Hawaii’s economy by addressing some of the burdensome or vague provisions of existing commercial and industrial leases of certain lands within urban districts by clarifying provisions in long-term commercial and industrial ground leases, without substantial reduction in the economic benefit to the landowners or impact on their ownership of the land, without impairing their lease contracts, and without the taking of any property rights without due process of law.

Senate Bill 764 explains that notwithstanding any other law to the contrary and unless expressly stated to the contrary in the lease, any lease of commercial or industrial leasehold property shall be subject to the following terms and conditions: 1) Whenever a lease existing on July 1, 2009, or entered into thereafter, provides for the renegotiation of the rental amount or other recompense during the term of the lease and the renegotiated rental amount or other recompense is based, according to the terms of the lease, in whole or in part on a fair and reasonable annual rent as of the commencement of the term, that provision shall: (A) Be construed to require that the rent shall be fair and reasonable to both the lessor and the lessee to the lease; and (B) Take into account any and all relevant attendant circumstances relating to the lease, including: (i) Past renegotiation practices and policies throughout the previously renegotiated lease rents; (ii) The uses and intensity of the use of the leased property during the term of  the lease approved by the lessor; (iii) The surface and subsurface characteristics of the leased property and the surrounding neighborhood of the leased property on the renegotiated date; and (iv) The gross income generated by the lessee on the renegotiated date.

In the second part of this bill, the purpose is to carry out the mandate of Article XI, section 3, of the Hawaii Constitution to conserve and protect agricultural lands and assure availability of agriculturally suitable lands.

The legislature finds that the land use law was enacted to “preserve and protect land best suited for . . . agricultural purposes and to facilitate sound and economical urban development” (Senate Standing Committee Report Number 580; 1961 Senate Journal).  Since that time, however, lands classified by the land study bureau as class A and class B lands, the lands most suited for intensive agricultural use, have declined from three hundred fifty-nine thousand six hundred ninety acres (Class A, one hundred twenty-five thousand one hundred sixty acres; class B, two hundred thirty-four thousand five hundred thirty acres) in 1960 to one hundred seventy-two thousand ninety-four acres (Class A, fifty-six thousand six hundred fifty-three acres; Class B, one hundred fifteen thousand four hundred forty-one acres) in 2007.  These agricultural lands are a resource that cannot be replaced once they are lost to development.

The inventory of lands that are suitable for agriculture is essentially fixed.  Unlike other agricultural inputs, agricultural lands cannot be manufactured when the demand for them increases.  In 1960, the land study bureau estimated that there were nearly three hundred sixty thousand acres of class A and B lands on the six major islands.  These were the lands upon which the State depended for profitable, competitive agricultural production.  By 2007, the inventory of class A and B lands had declined to slightly more than one hundred seventy-two thousand acres, making it more important than ever to conserve Hawaii’s most productive agricultural lands, especially in counties with a population of over five hundred thousand residents.

Part two of this bill provides that whenever any agreement or document for the lease of private agricultural lands with soil classified by the land study bureau’s detailed land classification as overall (master) productivity rating class A or B for agricultural use in counties with populations of over five hundred thousand provides for the renegotiation of the rental amount and the term of the lease, and the lessee has made improvements or is seeking to make improvements on the land, the renegotiated term of the lease shall include an extension of the lease for a period of not less than seventy-five per cent of the original term of the lease.

Seek the impossibility and make it possible!

Life is exciting.  I look forward to the future.  Seek the impossibility and make it possible!

Pussycat Dolls ft. A. R. Rahman – Jai Ho (You are my Destiny) [Lead female singer is from Hawaii]

Rep. Clift Tsuji and Rep. Jon Riki Karamatsu at a House-Senate conference during the 2008 Legislative Session. 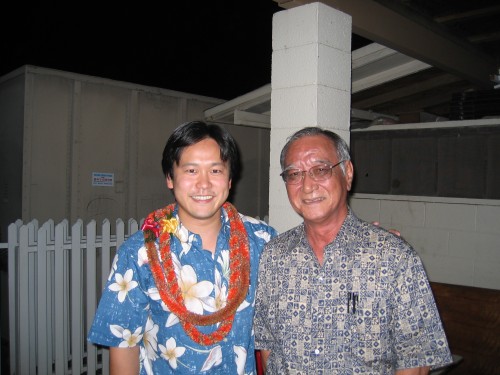 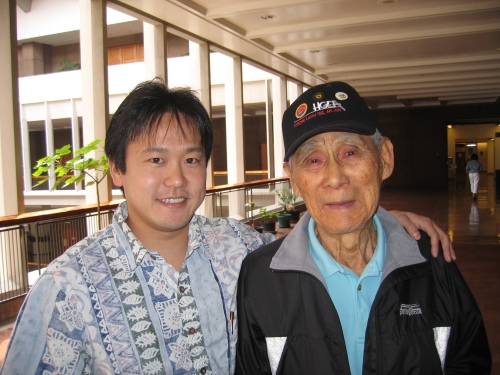 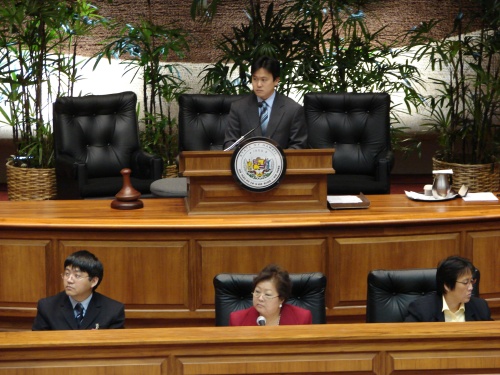 Rep. Jon Riki Karamatsu presiding over the House floor session as Vice Speaker of the House during the 2007 Legislative Session.

Ganbatte! Do your best! 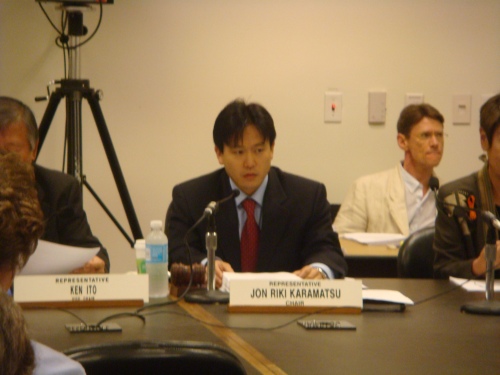 2009 has been very challenging thus far.  In the legislature, we have taken on some of the most challenging and difficult issues such as balancing the budget despite the economic crisis, civil unions, ceded lands, disputes on tort, private lessor and lessee disagreements, and amending the campaign finance laws to reflect court decisions.  I experienced threats by individuals, had disagreements with my colleagues, and witnessed disagreements between other individuals.  Everyone is trying their best for Hawaii.

The biggest void in Hawaii politics is not having Rep. Bob Nakasone.  We could always go to him for advice.  Often times disputes would be aired out at his office at night.  Rep. Nakasone had a presence that made you feel good.  Politicians, lobbyists, bureaucrats, and friends who were close to him tell me how they miss him.  A number of people believe 2009 is one of the biggest years in Hawaii’s political history because of the type of issues we are taking on.  With big policy agendas, come big disputes and high emotions.  It is during those difficult decisions, especially late at night, I think of Rep. Nakasone wishing I could have one more talk.

With all the struggles and stress, I balance myself by exercising, praying to my loved ones who passed away, and listening to music.  Music really helps.  Live your life to the fullest.  Accomplish as much as you can now.  We may never have tomorrow.  That is the reason why I try so hard to achieve as much as I can now.  I am more aware of death and its quickness.  We must try to be faster than death.  Ganbatte!  Do your best!