I heard that Representative Jack Suwa passed away last Friday, January 22, 2010 at 85 years old.  I met Rep. Suwa after I got elected in the Hawaii House of Representatives in 2002.  At that time, he was working for the House Sergeant-at-Arms.  I heard how he was a good House Finance Chair and was known for his straightforward style of leadership and how he would mumble when he spoke.  Rep. Suwa told me he was friends with my late grandpa Maurice Karamatsu, former Vice President of Duty Free Shoppers.  I thanked him for his friendship with my grandpa.  He donated to my campaign to show his support.  I am so honored I got to know him.

On Tuesday, February 19, 2010 in the early afternoon, I stepped outside my office.  When I walked out I saw paramedics pushing someone in a stretcher.  Immediately I felt worried.  Later that evening I found out Jon Kobayashi was the one in the stretcher.  He had suffered aneurism.  I was shocked and saddened.  I met Jon through Rep. Bob Nakasone in 2003.  He was such a nice person.  I always enjoyed talking to him.  In 2006, when my grandma Bessie Karamatsu was in Queen’s hospital, every evening I would walk to the hospital and then return to the capitol visiting Rep. Nakasone and his gang at his office.  Jon and I were outside on the balcony.  He knew my grandma’s health was failing and I was hurting inside.  He told me the most comforting words a person could say and hugged me.  I tried to hold back my sadness and I could see the sincerity in Jon as he looked emotional as well.  Earlier this month, I bumped into him at the capitol.  I told him, “We gotta hang out sometime.”  He smiled and agreed.  That was the last time I talked to him.  Jon had such a good heart, so sincere and caring.  It is hard to believe he is gone.

Opening of the 2010 Legislative Session

Opening of the 2010 Legislative Session was on Wednesday, January 20, 2010 from 10:00 A.M.  After, from 11:30 A.M. Rep. Roland Sagum, Jerry Chang, Ken Ito, and I had a small luncheon for our family, staff, and friends at Iolani Palace administration building.  I met with the president and executive director of the Hawaii Farm Bureau Federation at my office from 1:00 P.M.  Baron Gushiken of Rep. Cindy Evans discussed a couple of his boss’ bills with me from 1:30 P.M. at my office.  I met with two businessmen that are involved with pest control and health products that are not harmful to our environment or body.  At about 4:00 P.M., I went over legislation with my four attorneys.  Finally, I ate dinner with Rep. Jerry Chang and friends at his office.

I met with a representative of Common Cause Hawaii at my office from 11:00 A.M.

I met with a representative from Aloha Care at myoffice from 1:00 P.M.

I met with a lobbyist/attorney and professional design engineers at my office from 1:30 P.M.

I chaired the House Judiciary informational hearing on the Judiciary courts and its budget at the state capitol from 2:30 P.M. 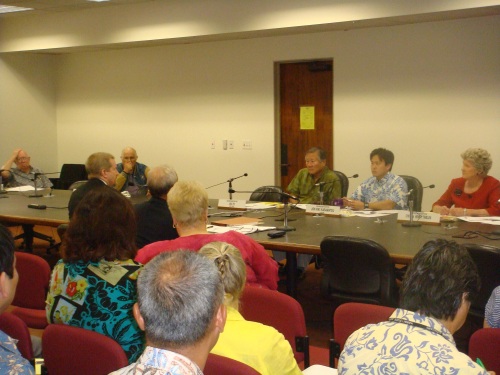 Get-together with politicians and business persons from Kauai, Oahu, Maui, and Hilo

I attended the Soka Gakkai Victory Over Violence “I Choose” Musical, Entertainment, and General Assembly at the Hawaii Convention Center on Sunday, January 17, 2010 from 12:00 P.M. to 4:00 P.M.

I made a speech in front of over 3,000 Soka Gakkai members and guests.  I spoke about how Hawaii passed the Peace Day law and last year Soka Gakkai worked with us in the annual event.  I also mentioned how we can work together for peace through peace education to reduce the violence in Hawaii and peace missions to reduce the violence in the world.  I honored Soka Gakkai president Daisaku Ikeda with a Hawaii State House certificate and mentioned the programs he championed to promote peace.  Also on stage were Reps. Glenn Wakai and Lyla Berg. 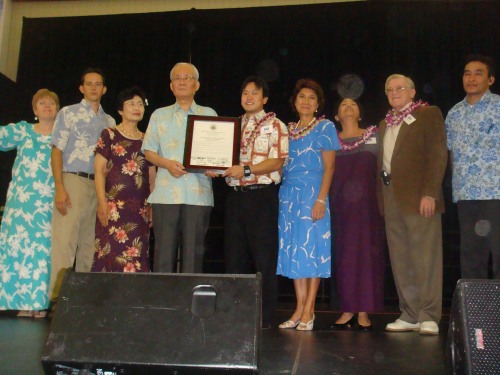 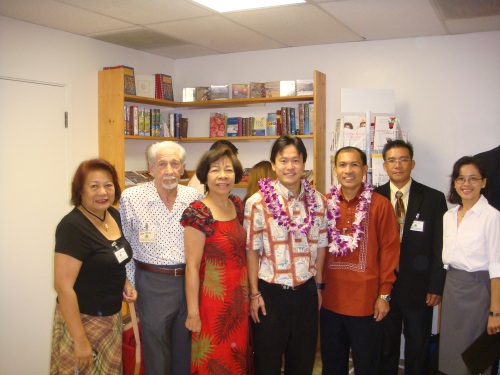 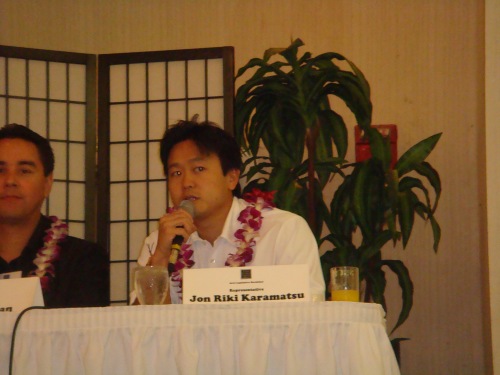 Thank you to Honolulu Advertiser, Honolulu Star Bulletin, and other mainstream media in Hawaii for stepping up on their etiquette policy in regards to anyone posting comments on their websites.  Earlier I had wrote in this journal on how I wanted to prevent people from using offensive language such as swearing words or racist language in our mainstream media’s websites, especially since we encourage our children and young adults to keep up with current events.  My journal entry stirred some discussion on this subject on the Honolulu Advertiser’s website.

My sister Lara, friend of my late grandpa Maurice Karamatsu, and I.

2:00 P.M. – Meeting with my friend in the insurance and Chinese trade business at my captiol office.

3:00 P.M. – Meeting with St. Andrew’s Priory at their administration building.

9:30 A.M. – Meeting with my four attorneys at my capitol office.

2:00 P.M. – Meeting with an attorney/lobbyist and an associate regarding indigent legal services.

2:00 PM – 2:30 PM: Meeting with representative of the ironworkers union at my office.

8:00 AM – 9:30 AM: Hawaii Dental Association Legislators Breakfast at the Pacific Club.

2:00 PM – 3:00 PM: Meeting with University of Hawaii West Oahu Chancellor Gene Awakuni regarding the development of the new campus in Kapolei.

4:00 PM – 4:30 PM: Meeting with the executive director for Citizens for Fair Valuation at my office.

10:00 AM – 11:30 AM: I, along with House leadership, met with county clerks and state Office of Elections at Speaker Calvin K.Y. Say’s office.

1:30 PM – 3:00 PM: I discussed pending bills and my bills with my four attorneys and assistant committee clerk.

4:30 PM- 5:00 PM: I met with my business friend in the travel industry catering to the Chinese visitors.

I attended the Ho’okako’o Corporation  Legislative Roundtable on the Charter Schools and State Schools “Expanded Learning Time” program at the state capitol, room 229 from 12:00 P.M. – 2:00 P.M.

I met with Board of Education (BOE) Member Donna Ikeda and the Hawaii State Student Council at my office from 3:00 P.M. – 3:30 P.M.  They want the student BOE member to be able to vote.

I met with my friend Tracy Okubo to discuss legislative ideas.

I ended the evening with watching a little of the BCS Championship Bowl game between Texas and Alabama and went with my friends to eat shabu shabu, which I haven’t eaten in a couple of years or more.

I was quoted in a January 6, 2010 Honolulu Advertiser article regarding Lt. Governor Duke Aiona’s proposal for an elected Secretary of State to run Hawaii’s Office of Elections: http://www.honoluluadvertiser.com/article/20100106/NEWS03/1060360/Aiona+wants+secretary+of+state

I got my truck’s oil changed and tires rotated, mailed “thank you” letters to donors to my campaign, worked on my next campaign event, made phone calls for my campaign, and worked on my business inventory at our Waipahu warehouse.

On Tuesday, January 5, 2010, I exercised from 5:30 A.M. – 7:30 A.M., attended the House leadership meeting at Speaker Calvin K.Y. Say’s office from 9:00 A.M.- 10:30 A.M., hosted a meeting with Hawaii County Mayor Billy Kenoi, his administration, and the executive director of the Honolulu Ethics Commission, attended a get-together with political friends of the late Senator Nadao “Najo” Yoshinaga at HGEA from 12:00 P.M. – 1:30 P.M., and attended the Honolulu Japanese Chamber of Commerce 65th Annual Shinnen Enkai at the Japanese Cultural Center of Hawaii.

On January 2, 2010, from 10:00 A.M. to 3:00 P.M., I attended a meeting with a group of community leaders from across the state in Makakilo and presented to them some of my legislative proposals.

On New Year’s Day, January 1, 2010, my parents, sister Lara and I attended the Jodo Shu New Year’s service at 10:00 A.M.  We prayed to my Karamatsu grandparents and ancestors.  We bought omomori for ourselves, cars, homes, and office.  Then we went to Diamond Head Memorial and prayed to my Sakai grandparents and ancestors.  About 12:30 P.M., we went to Izuma Taishyakyo to be blessed by the reverends along with thousands of other people.  We bought more omomori there as well.  We had dim sum for lunch at the Chinese Cultural Center.

Tonight I will spend more time with my parents and sister Lara at my parents’ house in Pearl City.

I have a slight cold, the first in several years.  I have never been sick more than one day since the Spring of 2002.  I hope my health stays strong like this for 2010 and beyond.

I had meetings at my capitol office with a representative for a company that can help process tickets and towing fees electronically (11:00 A.M.) and leadership of the Campaign Spending Commission (12:00 P.M.).   I attended the House leadership meeting at Speaker Calvin K.Y. Say’s office from 1:00 P.M. to 3:00 P.M.

My parents, sister Lara and her boyfriend, and I participated in the mochi pounding and kadomatsu making at the Pearl City Urban Garden where my dad is a volunteer from 10:30 A.M. to 2:00 P.M. on December 27, 2009.

Rep. Jon Riki Karamatsu with the kadomatsu he made at Pearl City Urban Garden on December 27, 2009.

I went to Regina Toguchi’s surprise farewell party at Coconut Club in Aston Hotel from 5:00 P.M. to 6:20 P.M. on December 27, 2009.  She is leaving her family’s company, Highway Inn to pursue other interests.

On December 26, 2009, I went to a Christmas Party put together by my friend Randy for all our friends at his grandma’s house in Aiea.

I spent Christmas Eve and Christmas with my parents and sister Lara at my parents’ house in Pearl City.  A lot of my family visited California to meet up with relatives there including my sister Mia who lives in Loma Linda, California.

I spent some time on Christmas night with my childhood friends Spencer and Ryan in Pearl City.  I also hung out with my frind Mike and his family in Pearl City.