This afternoon, January 26, 2019, I attended the funeral of my friend and long-time member of Jodo Mission of Hawaii, Mrs. Yoshiko Kitagawa that was held at Hosoi Garden Mortuary. Mrs. Kitagawa was a friend of my late grandparents Maurice (passed away in 1992) and Bessie (passed away in 1996) Karamatsu. As President of Jodo Mission of Hawaii, I represented the organization in placing incense at the front of the service.

Mrs. Kitagawa passed away on December 15, 2018 at the age of 99. She was born in Wailuku, Hawaii. She is the founder of L&L restaurant, which was sold to Eddie Flores. Mrs. Kitagawa is survived by her sons, Hiram, Eric; daughters, Mary Lim, Dianne Douglas (Ashley), Audrey Kitagawa (Dr. Gary Umeda); grandsons, Ian Douglas, Kai Melton-Kitagawa.

For the last 3 decades, I would see Mrs. Kitagawa at Jodo Mission of Hawaii’s services and events. For awhile in the last 8 years, she would playfully ask me when I was going to find a girl and settle down. I enjoyed my chats with her. I will miss her. 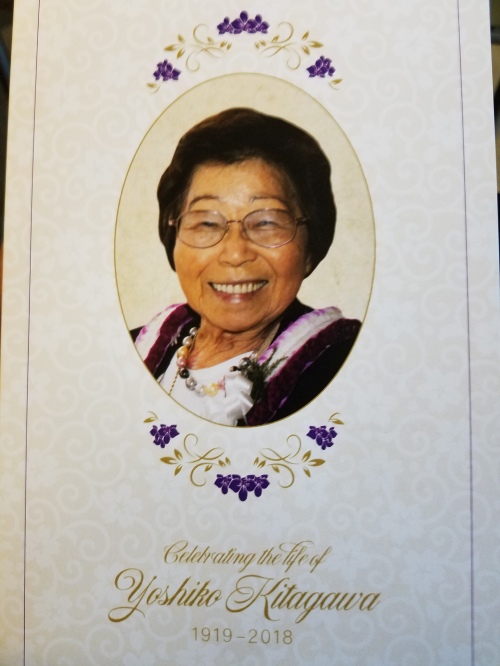